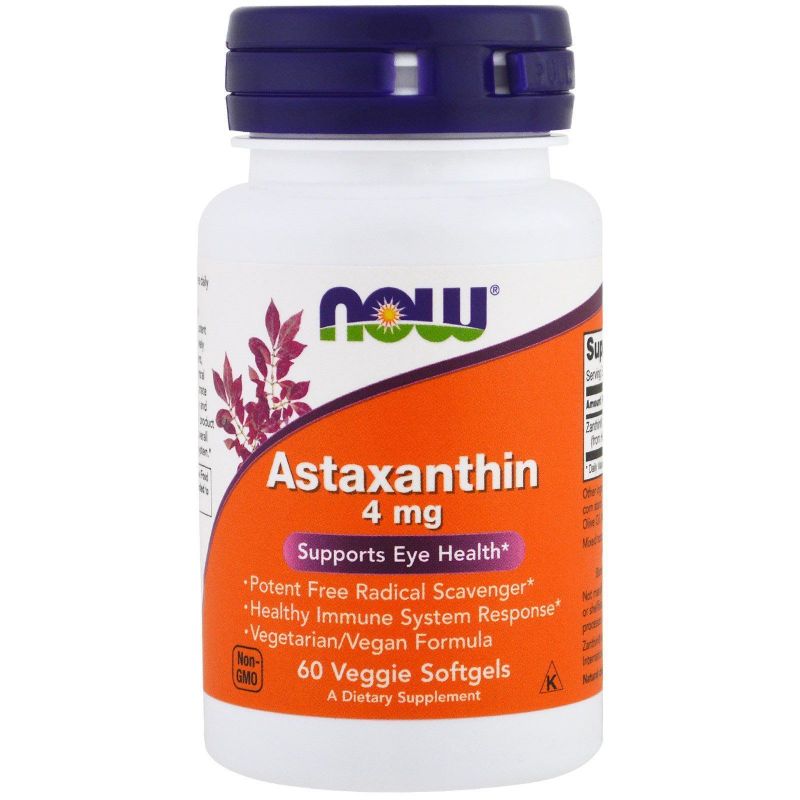 Astaxanthin is a naturally occurring carotenoid that because of its unique structure, provides a wide range of antioxidant benefits. NOW Foods Astaxanthin can help to protect cell membranes against free radical attack and potentiates the action of other antioxidants like Vitamins E and C. Scientific studies have demonstrated that Astaxanthin can help to support a healthy inflammatory response, enhance immune function, and provide neurological support. Recent research indicates that NOW Foods Astaxanthin may even help to support the skin's structure during exposure to sunlight.What is Astaxanthin?
BioAstin Astaxanthin is a red-colored carotenoid (orange-red antioxidant plant pigment) that is derived naturally from Haematococcus algae grown in a protected environment in Hawaii. This amazing xanthophyll compound is naturally occurring in phytoplankton, algae, plants and a few fungi and bacteria. Although Astaxanthin is not as well known as other carotenoids, it is not a newcomer on the antioxidant scene. It was first discovered and extracted from lobsters in1938. Among carotenoids, Astaxanthin is one of the most powerful fat-soluble anti-oxidant compounds. It protects plants, animals, and humans from cellular damage caused by oxygen and free radical damage. In rat studies, it was shown to reduce photoreceptor (eye) cell damage caused by light exposure.

What is the difference between Astaxanthin and Beta-carotene?
Astaxanthin belongs to the same family of fat-soluble carotenoid molecules as the yellow/orange colored Beta-carotene. It differs from Beta-carotene in that its' molecular structure contains two additional oxygen groups in each ring structure. This gives it a deep red color and classifies it as a xanthophyll, with up to 10 times stronger free radical scavenging activity. Another difference is that, unlike Beta-carotene, Astaxanthin cannot be converted to Vitamin A in the human body.

How do I get Astaxanthin in my diet?
Astaxanthin and Beta-carotene must both be obtained from the diet, since our bodies do not produce them. Unless you’re a regular algae eater, the best dietary source of this carotenoid are seafoods such as lobster, shrimp, crab and salmon. The characteristic pink or red color of salmon and trout is reflective of the presence of Astaxanthin that they ingest from their diet. Wild Sockeye salmon may contain up to 40 mgs of this rich antioxidant per kilo of flesh. This fat-soluble carotenoid is stored in the muscle tissue of fish. It is used to protect the fatty acids and cellular membranes from oxidative stress caused by the highly aerobic activities inherent in their migratory habits. Salmon eggs are naturally loaded with Astaxanthin by design, in order to protect the developing life inside from UV light and oxidation caused by the environment of the waters they hatch in.

As a dietary supplement, take 1 softgel daily, preferably with meals.