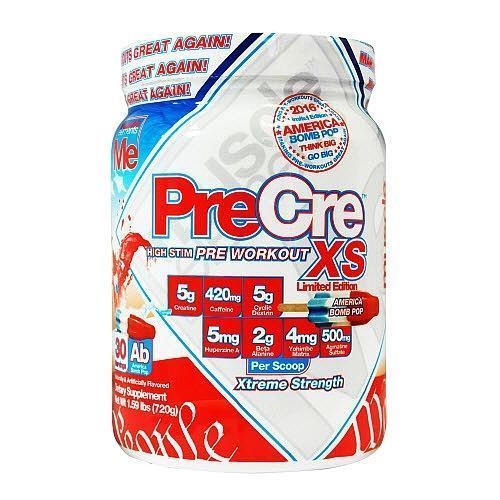 The team at Muscle Elements was an integral part of bringing one of the very first pre-workouts to the market back in 2004. Over the last several years the meaning of pre-workout has gone from the all-inclusive energy, focus, strength and pump supplement to a simple energy and focus product often requiring the purchase of an additional product to deliver pumps.

Some consider high stims as “hardcore” … call us old school but the group at Me considers lifting HEAVY ASS weight hardcore!

In steps PreCre XS and now “hardcore” becomes Xtreme! No longer do you have to choose between high stims OR performance based pre-workouts. PreCre XS takes all of the amazing benefits of energy, focus, strength, pumps, and endurance of original PreCre even further by possessing Xtreme levels of energy, focus, pumps and performance!

While most other brands are content with following the trend of high margin inadequate pre-workout supplements Muscle Elements has no interest in following trends over producing the best so you can perform your best!

Cyclic Dextrin - Cyclic dextrin is a carbohydrate that is made from the enzymatic breakdown of amylopectin. The highly branched cyclic dextrin molecules consist of structural units of d-glucose and have a high molecular weight which increases the speed which it is emptied in the stomach and which increases absorption of nutrients . Supplementation of cyclic dextrin can help prolong endurance and support reduced fatigue. PreCre XS provides 5g of Cyclic dextrin per serving.

Modified Glucose Polymers (Maltodextrin) - a carbohydrate that is polymer that consisting of glucose units linked together that is made from corn, potatoes or rice. It is rapidly absorbed and easily digestible which makes it ideal to consume before exercise. Consumption of maltodextrin before physical activities has been shown to support reduced fatigue, increased endurance capacity, improve exercise performance, and recovery. PreCre XS provides 5g of Modified Glucose Polymers per serving.

AgmaMAX® (Agmatine Sulfate) - is a trademarked agmatine sulfate formulation, and is what Arginine becomes within the body. Acting on a wide variety of processes within the body, it is known to; increase Nitric Oxide production and maintain it for long periods of time (commonly referred to as the perpetual pump) and well as have shown to have some cognitive support as well. PreCre XS provides 500mg of Agmatine Sulfate per serving.

Betaine HCL - Betaine is a nutrient that is a compound of the amino acid glycine and is found in food sources such as beets, liver, eggs and fish. Betaine may have several effects on human health such as being an antioxidant and supporting normal homocysteine levels . Though the mechanism of action is not fully understood consumption of betaine before exercise has been shown to support increased nitric oxide, anabolic signaling, protein synthesis, muscle endurance, anaerobic capacity and even oxygen consumption . 1.25 grams twice daily has been shown to increase strength and power . PreCre XS provides 1.5 grams of Betaine HCL per serving.

Creatine - Creatine monohydrate is an amino acid that is naturally produced in the body that provides energy to the body primarily the muscle . It is present in meat such as fish and beef and increases ATP which is beneficial for higher power, short term anaerobic activities such as sprinting, football and hockey. The supplementation of creatine increases muscle strength, muscle power, lean body mass, aerobic and anaerobic work capacity, satellite cell number, exercise performance, reduces muscle damage and fatigue. Ingesting dosages as low as 2.3 grams a day increases creatine concentration and resistance to fatigue. PreCre XS provides 4 grams of Creatine Monohydrate per serving.

Creatine HCL - a form of creatine that is bound to hydrochloric acid that requires no loading because it is completely assimilated in the body that is used quickly. There is limited bloating and no need to cycle off. Ingesting dosages as low as 2.3 grams a day increases creatine concentration and resistance to fatigue. PreCre XS provides 1 gram of Creatine HCL per serving.

Creatinol O Phosphate (COP) - a creatine analogue that has been researched to improve cardiac conditions. Though it is close to creatine in chemical structure its function is closer to beta alanine in terms of its effect. Usage of Creatinol O Phosphate supports prolonged anaerobic activities by buffering accumulation of lactic acid which allows individuals to exercise for longer periods of time. PreCre XS delivers 500mg of COP per serving.

Taurine - an amino acid that is a derivative of cysteine. Research has shown that supplementation of taurine increases muscular performance, exercise capacity, reduces lactate acid concentration during exercise, muscle damage and oxidative stress after exercise. PreCre XS delivers 500mg of Taurine per serving.

Caffeine Anhydrous - a central nervous and metabolic stimulant that is naturally found in coffee beans, tea and guarana. Caffeine has been shown to increases energy, thermogenesis, alertness, reduce hunger and fatigue. An effective amount of caffeine can vary from 50-200 mg depending on the individual. PreCre contains 370 mg per serving.

N-Acetyl Tyrosine - a combination of acetic acid and the amino acid tyrosine which is found in foods such as yogurt, cheese and fish. It is a precursor to the neurotransmitter dopamine which plays a role in the brain in cognition and motivation. It has been shown to improve exercise capacity and mood during stressful conditions such as stress and fatigue. PreCre XS provides 500mg of N-Acetyl Tyrosine per serving.

DMAE (DimethylAminoEthanol Bitartrate) - a compound that is a biochemical precursor to acetylcholine. DMAE is beneficial for memory function, can increase mental adaptability, concentration and and can support healthy cognition. PreCre XS provides 150mg of DMAE per serving.

Dicaffeine Malate (Infinergy™) - is far more effective and easier on the stomach than caffeine. This is because malic acid is able to buffer the salts in caffeine, allowing for easier digestion. It is also thought that the malic acid in this combination helps to replenish the energy produced by caffeine. Dicaffeine Malate is known to increase energy levels, aid in hunger suppression, stimulate thermogenesis (which is important for weight loss), and even improve the ability to focus. PreCre XS has 70mg of Dicaffeine Malate (yielding 50mg of caffeine) per serving.

Huperzine A 1% - A nootropic that allows the mind to focus more effectively and support memory, learning and cognitive function. This ingredient works synergistically with other nootropics and pairs well with stimulants for clarity, focus and concentration. PreCre XS has 5mg of Huperzine A 1% per serving.

Rauwolfia Vomitoria Root Extract (Std. 90% Alpha-Yohimbine) - This ingredient is an extremely rare variation of Yohimbine with a longer half-life and a more powerful α2-AR affinity. PreCre XS has 2mg of Alpha-Yohimbine 90% per serving.

Directions For PreCre XS: Mix 1 level scoop with 6 to 8 oz of water 30 minutes before your training session. Do not consume PreCreXS™ 5 hours prior to sleep. DO NOT CONSUME MORE THAN ONE SCOOP PER DAY UNDER ANY CIRCUMSTANCES. Store in a cool dry place. Contents packed by weight not volume.