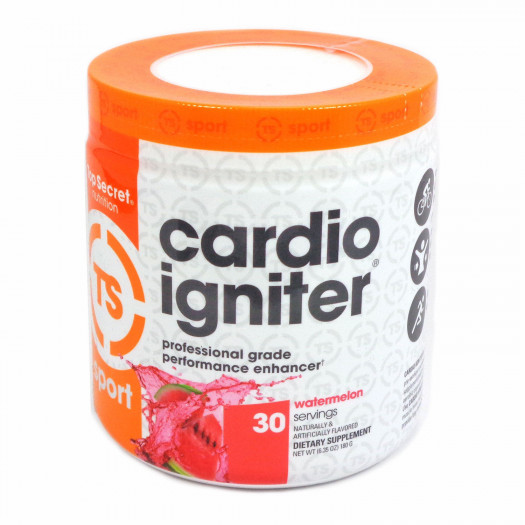 Increase your endurance and burn more fat to get the most out of your cardio sessions! Cardio Igniter® is designed to maximize your aerobic capacity so you can run, swim, spar, train longer; and burn fat, not muscle, while doing it. So drink up, lace up, and get out there and go for miles.*
Never do high intensity exercise without it!
AMINO SHIELD® WITH URSOLIC ACID - with ursolic acid – Amino Shield is a patent-pending anti-catabolic lean mass potentiating element, containing ursolic acid* We included Amino Shield in Cardio Igniter to help reduce muscle loss and support lean mass stimulation.
RED BEET JUICE HIGH IN NITRATES - Red beet root is naturally high in nitrates (NO3) which are believed to improve athletic performance. A study led by the University of Exeter, published in 2009 in the Journal of Applied Physiology, pointed to the benefits of NO3, concluding that they boost a cyclist's endurance. Nitrates are helpful to athletes because they quickly bring oxygen to muscles.
RASPBERRY KETONES - Research suggests that raspberry ketones may have the potential to support body fat reduction by increasing norepinephrine-induced lipolysis (stored fat release).
L-CARNITINE - is a naturally occurring amino acid that plays a vital role in the metabolism of fat. It functions as a transporter of fatty acids into the mitochondria, the metabolic furnace of the cell. It has been established that an adequate supply of L-carnitine is necessary for the maintenance of good health and energy.
CARNOSYN® BETA-ALANINE - Beta-alanine is an amino acid that promotes muscular energy. A study published in a 2010 issue of Medicine and Science in Sports and Exercise concluded that supplementation with beta-alanine increases muscle’s carnosine content and, therefore, total muscle buffer capacity, with the potential to improve physical performance during high-intensity exercise and to delay the onset of neuromuscular fatigue.
BRASSICA CAMPESTRIS - is a lipolytic stimulator, is a cruciferous vegetable that has been suggested to possess weight loss promoting effects.
L-TYROSINE – is a precursor to dopamine, also known as the “feel-good hormone”. A recent human study showed that acute tyrosine supplementation is associated with increased endurance capacity for moderately trained subjects exercising in hotter climate.
L-TAURINE - is a non-essential sulfur-containing amino acid and plays a role in several metabolic processes, such as heart contraction and antioxidant activity. It is essential for cardiovascular function, and development and function of skeletal muscle. In an exercise study conducted with 11 men ages 18-20 and taurine supplementation, it was found that significant increases in VO(2)max, exercise time to exhaustion and maximal workload occurred.
CAFFEINE – We have included caffeine in Cardio Igniter for its ability to improve aerobic performance, reduce fatigue, stimulate mental activity, induce lipolysis, and help prioritize fat as an energy source during exercise.
EVODIAMINE – Evodiamine is an extract from the Tetradium family of plants. Research has suggested that evodiamine acts primarily as a thermogenic, similar to capsaicin.
CHOLINE BITARTRATE - Choline bitartrate is a water-soluble B vitamin that is a precursor to acetylcholine, one of the crucial brain chemicals. Acetylcholine is a neurotransmitter used throughout the body; it controls muscle contraction and determines your brain speed. Research suggests that choline levels drop during exercise, and supplementing choline prior to exercise can enhance pre-workout vigor and reduce post-workout fatigue.
ELECTROLYTES - Are needed to maintain proper fluid balance and to optimize your energy levels so you can function at your best. We have added a unique electrolyte matrix of dipotassium phosphate, disodium phosphate, magnesium glycerophosphate, and magnesium aspartate to Cardio Igniter to help maintain a desirable electrolyte balance while exercising.
Get the most out of your workouts by burning more fat and boosting performance.

Directions For Cardio Igniter: Mix one (1) scoop with 8-12 oz. of cold water 20-30 minutes before training. Begin with one (1) scoop to assess your tolerance. To assess tolerance start with no more than one scoop per serving, and increase servings to no more than two scoops per day for desired effect. This is a stimulant based supplement, always check with a physician or health care provider prior to taking supplements and exercising.