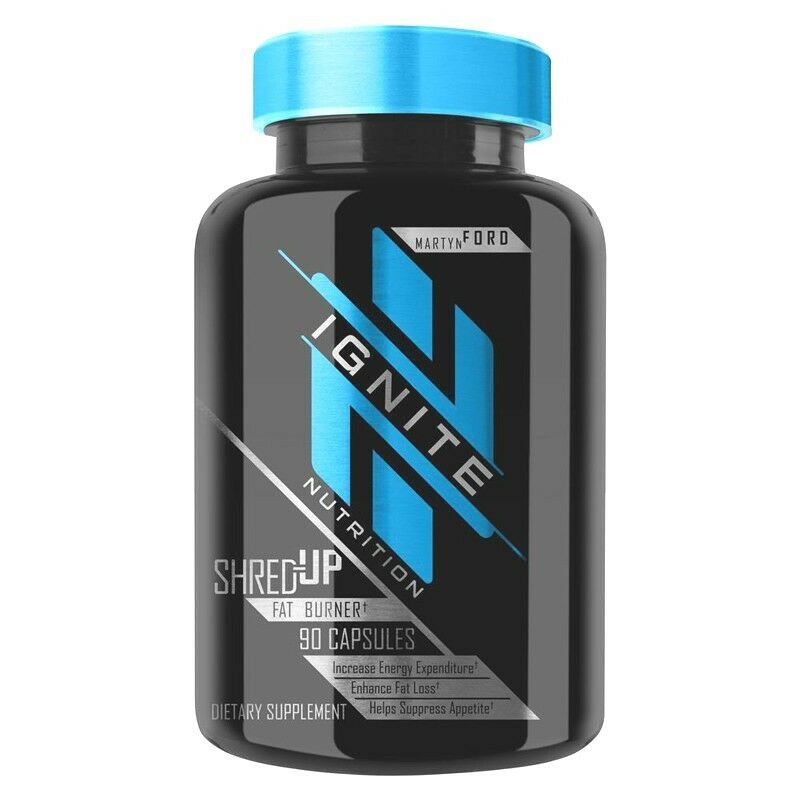 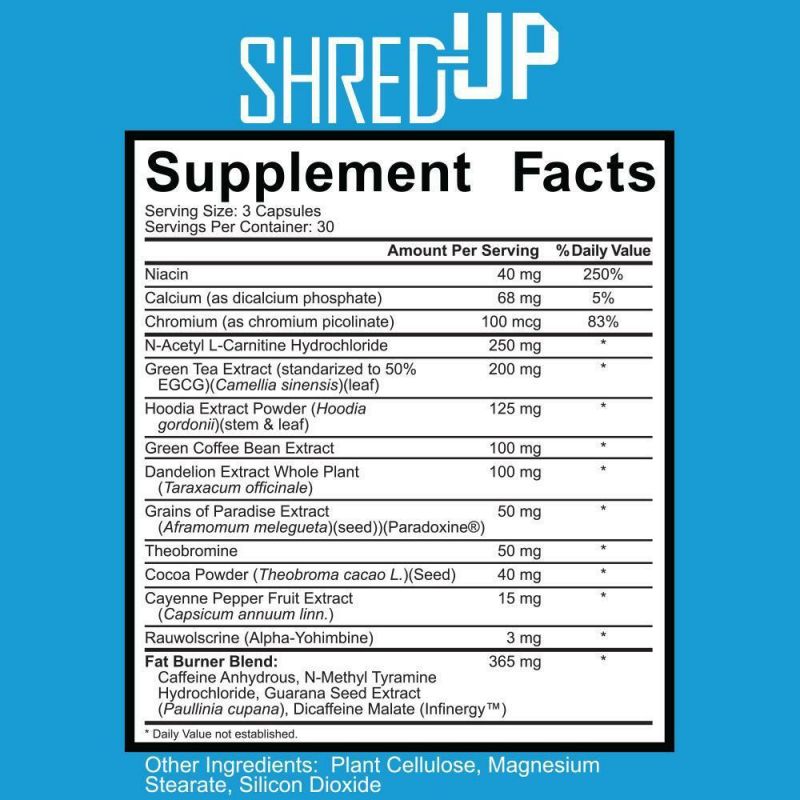 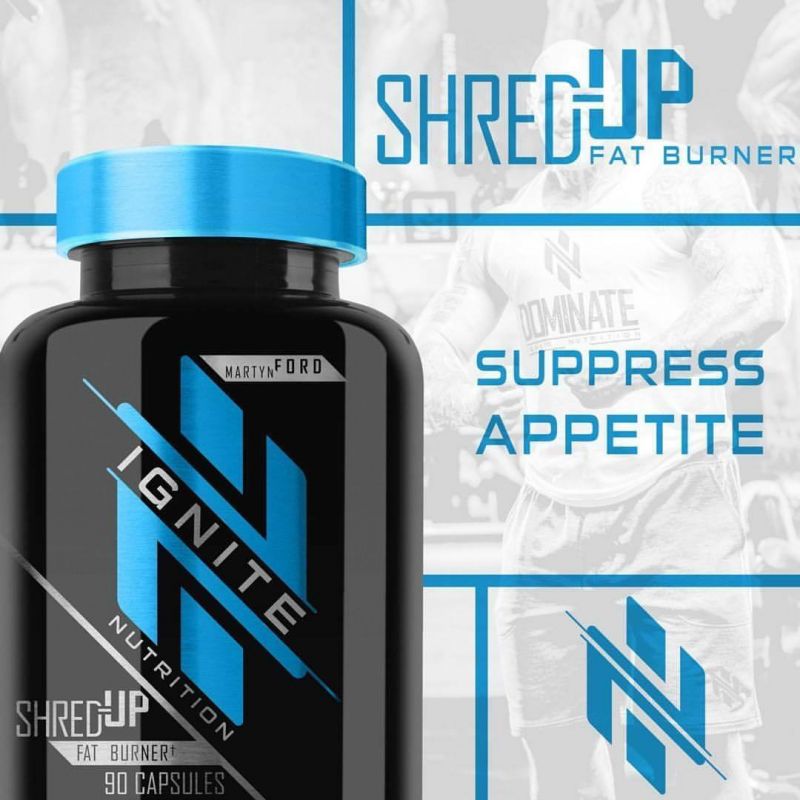 Get Lean & Ripped With The Ultimate Fat Burner!

We know how it is – you go into your off season and maybe get a little too loose. Before you know it, you need to get back into peak shape because you don’t have much time before the start of your season. You know you’ll have to take some drastic measures to speed up the process – and you know you’ll lack energy, experience serious hunger pangs, get a little cranky and foggy-headed as you go deeper into your diet – but there’s no other way. There’s good news – you can make it easier with a quality fat burner that’s effectively dosed with proven ingredients. Wait a minute – which one do you choose? Simple, you go with the best - Shred-Up by Ignite Nutrition!

Shred-Up utilizes effective, researched ingredients that work together to meet the needs your body has while dieting and exercising – such as increasing energy, enhancing focus, controlling hunger and stimulating your metabolism. To give you energy and alertness, our advanced Fat Burner Blend consists of a complex of Caffeine Anhydrous, N-Methyl Tyramine Hydrochloride, Guarana Seed Extract, and Infinergy™ Dicaffeine Malate, which provides 320 mg of total Caffeine for smooth, crash-free, extended energy.

Thermogenesis is one of the fat burning benefits of Caffeine, so we’ve made sure this benefit is optimized by including additional thermogenics that support Caffeine, such as Cayenne Pepper Fruit Extract, which contains the active ingredient Capsicum, the compound in that stimulates thermogenesis, and Paradoxine® Grains of Paradise, which directly targets brown adipose tissue.

If you’re going to be successful in your efforts to get back in shape for your chosen sport, you need to suppress carvings and keep hunger in check. Shred-Up has you covered with Hoodia Gordonii Extract, a potent natural appetite suppressant that’s been used for years to derail hunger and cravings.

Shred-Up goes beyond the average fat burner by including Green Tea, which can raise levels of the hormone that signals your body to burn fat, and Green Coffee Bean, which contains the active ingredient Chlorogenic Acid, known to have several fat loss benefits.

There’s also Dandelion, the well-known diuretic, and Zychrome ® Chromium, to control insulin response and stabilize levels of blood sugar. Finally, there’s N-Acetyl-Carnitine, to support the transfer of stored fat to be used as fuel by the body.

Caffeine Anhydrous – Caffeine is the most popular energy and alertness compound on the market. Caffeine has quite a few benefits – not only does it increase energy and alertness, it improves focus, impacts your performance in the gym as well as your chosen sport, and stimulates thermogenesis. Caffeine Anhydrous has had all the moisture removed so it’s stronger on a per gram basis than regular Caffeine.

N-Methyl Tyramine Hydrochloride – This methylated version of L-Tyramine works synergistically with caffeine and stimulates the neurotransmitters epinephrine (adrenaline), norepinephrine (noradrenaline), and dopamine. Each of these neurotransmitters are part of the body's "fight of flight" response. As a result, you experience increased energy, an increased metabolic rate, and a greater fat breakdown.

Guarana Seed Extract – This is a fruit from South America that is 22% caffeine by weight – that’s more caffeine than a coffee bean. Guarana also contains tannins, which are compounds that slow the release of the caffeine in Guarana, resulting in a smoother, more extended energy experience with no crash.

Infinergy™ Dicaffeine Malate – Infinergy™ is a trademarked combination of Caffeine and Malic Acid that increases energy, enhances focus, and stimulates thermogenesis. This is a buffered form of caffeine so there’s minimal gastric discomfort. Additionally, Malic Acid is heavily involved in the ATP system of energy.

Here’s the rest of this innovative formula:

N-Acetyl L-Carnitine – 500 mg – This is an exceptionally bioavailable version of Carnitine, which helps transport stored fat to the mitochondria where it is then burned to help meet the energy needs of the body.

Hoodia Gordonii Extract Powder – 125 mg – This plant from South Africa has an extended traditional use as an appetite suppressant that’s especially used during long hunting expeditions. In more recent years, Hoodia has earned a reputation as a popular diet ingredient due to its ability to control hunger. It’s thought that Hoodia impacts your sense of hunger by tricking your body into thinking it’s full.

Zychrome® Chromium – 100 mcg – This is a patent-pending version of Chromium that has been clinically shown to promote healthy insulin sensitivity as well as normal blood glucose levels.

Green Tea Extract (50% EGCG) – 100 mg – This popular ingredient is known for its antioxidant benefits, and contains active ingredients known as catechins. Of these catechins, the most potent is known as EGCG, or Epigallocatechin Gallate, which blocks the enzyme that breaks down norepinephrine, a hormone that signals the breakdown of fat to be used to meet the body’s energy needs. Blocking this enzyme means that norepinephrine can send a stronger signal to the body, which releases more fat for energy needs.

Green Coffee Bean Extract - 100 mg – Green Coffee Beans are unroasted, allowing the active ingredient, Chlorogenic-Acid, to remain intact. Why does that matter? Chlorogenic Acid is believed to be the compound that affects fat loss. Preliminary research indicates that it lowers carb absorption – a huge benefit. Also, animal studies have found that Chlorogenic Acid can enhance the function of adiponectin, the body’s main fat burning hormone.

Dandelion Extract – 100 mg – This herb has been used an effective diuretic in traditional Chinese medicine for centuries, it has also been used to support liver health and digestion. Dandelion is registered in Canada as a natural health product and used mainly as a diuretic, with an initial study backing its use.

Paradoxine® Grains of Paradise Extract – 50 mg – This West African plant contains 6-paradol, an active phenol. Paradoxine® is a premium quality, non-stimulant Grains of Paradise extract that contains 12.5% 6-paradol. This active ingredient stimulates BAT (brown adipose tissue) thermogenesis by supporting the conversion of stored fat into BAT, which is then used to meet the energy needs of the body.

Cayenne Pepper Fruit Extract – 25 mg – This popular compound contains the active ingredient known as Capsicum that can stimulate thermogenesis, which burns more calories for energy. The synergistic combination of ingredients in the exceptional Shred-Up formula are designed to dramatically increase the usage of stored fat for energy – combine that with our exclusive energy/focus blend plus appetite suppression, and you have the perfect fat loss formula.

Get In Peak Shape with Shred-Up by Ignite Nutrition! 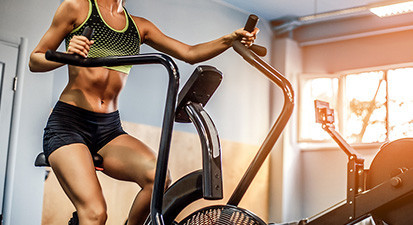 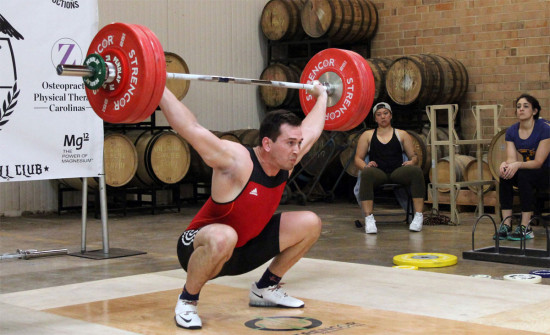