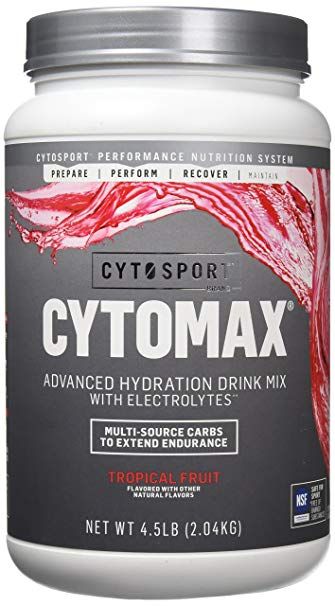 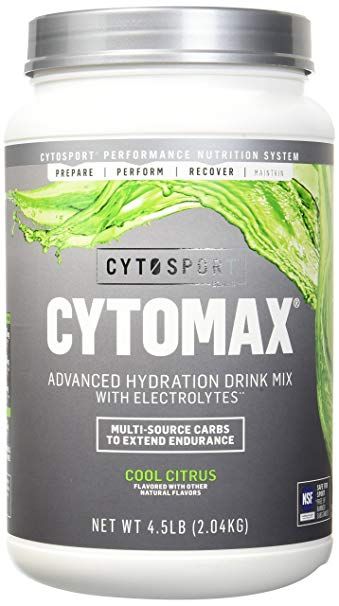 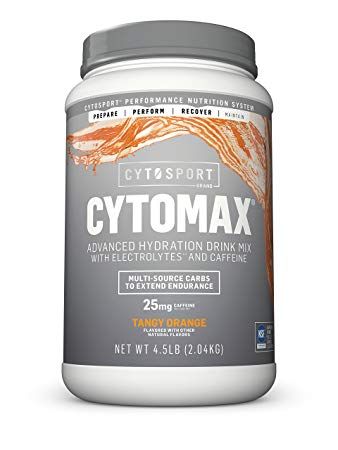 CytoSport Cytomax Performance Drink is made for a different brand of athlete. Its blend of complex carbohydrates and sugars work to sustain energy, so you can train harder, build stamina, and achieve superior results - Proven Results!

Beat the Burn!
Exclusive to Cytomax products, Alpha-L-PolyLactate is a proprietary energy source proven to provide energy longer and faster. Cytomax lowers acid in muscles, which prevents burning and cramping during training and helps reduce soreness and speed recovery.

In a University Study, the Alpha-L-Polylactate found in Cytomax was shown to: Provide Energy 3X Faster and 3X More Efficiently Than Glucose. This breakthrough allowed athletes competing in a long hard ride (90 minutes at 65% VO2max) to sprint 22% longer on Cytomax than when consuming another popular sport drink. Simply put, Cytomax outperforms the competition - so you can outperform yours.

Cytomax with Sustained Energy
No other sports drink can match Cytomax's proven performance. University studies have proven that Cytomax is:

These results are possible due to the inclusion of a unique, exclusive, energy component: Alpha-L-Polylactate (lactate with acid removed, clustered around amino acids and carbohydrates). This proprietary lactate is efficiently used as a fuel faster than other carbohydrates and provides energy as well. In addition, it enters the blood stream and tissues faster than a single carbohydrate source, and is utilized more efficiently. The lactate (in Alpha-L-Polylactate) is utilized more efficiently - all while decreasing tissue acidity.

Alpha-L-Polylactate - when combined with CytoSport's multiple carbohydrate blend - gives you sustained energy. In University studies, athletes had better performance after three hours of intense exercise with Cytomax than with another leading sports drink. In addition, Cytomax contains electrolytes - including sodium, potassium, magnesium and calcium for optimal hydration. Cytomax does not contain artificial FD&C colors or artificial sweetener.

Why is Cytomax better then those other "thirst-quencher" sports drinks?
Most commercial sport drinks are made with primarily simple sugar as an energy source. This gives you quick energy but may cause a corresponding blood sugar drop when the initial sugar spike wears off. Many commercial drinks ignore the scientific research that proves 7% carbohydrate solution is ideal for gastric emptying. A drink with too high a sugar content is processed as a food by your body and does not contribute adequately to hydration.
Commercial drinks do not include any other performance and recovery-enhancing ingredients like Cytomax. The complex carbs in Cytomax help you sustain energy levels over your entire workout and prevent exercise-induced glycogen depletion. Cytomax's patented Alpha-L-Polylactate buffers lactic acid in your working muscles, preventing burning and cramping during training and reducing soreness the next day. The antioxidants in Cytomax (Tangy Orange flavored powder only) help fight free-radical production in your body head-on during your workout. The succinates in Cytomax improve the rate of oxygen delivery to your working muscles, reducing perceived exertion at all intensity levels.
During workouts, you will be able to push your body harder without depleting your reserves and becoming exhausted at the end. This is due to enhanced oxygen carrying capacity, lower blood lactate levels, and stabilized blood sugar levels.
In the hours after workouts, instead of feeling lingering fatigue, you will feel refreshed and replenished - even after highly intense workouts. Cellular balance will be restored quickly when you deliver the nutrients and performance ingredients your body needs during exercise with Cytomax.
Sometimes I get cramps when I drink during workouts. Can Cytomax help this?
Yes. Cytomax is designed to be easily absorbed by your system and quickly distributed to your working muscles. Drinks that contain too much simple sugar or have a carbohydrate content that are too high are difficult to assimilate and will linger in your stomach. You may feel bloated or succumb to muscle cramps when your fluid replacement drink does not efficiently reach your muscles.
In addition to its acid-buffering properties, alpha L-Polylactate has been found to enter your muscle tissue 2-10 times faster than simple carbs. Cytomax also contains the ideal levels of sodium, potassium and other electrolytes to ensure your cells remain in perfect fluid and electrolyte balance during and after your workout.
Why shouldn't I just drink plain water during exercise?
Water is nature's perfect fluid replacement and always will be. However, your needs during exercise include more than just water. You need to ensure an ideal balance of fluid, nutrients, and electrolytes in every cell of your body.
When you put maximum effort into a workout, you deplete your system of stored energy. You may feel great while your heart is pumping and the adrenalin is flowing during your workout, but this exercise-induced depletion extends your recovery time and may cause fatigue, mood swings, sugar cravings, episodes of strong thirst, and body temperature fluctuations in the hours after your workout. These are all signs that your body is in a breakdown state. You can still push yourself during workouts, but you need to make it easier on your body afterwards if you want to avoid fatigue and burnout.
As water has no calories and no antioxidant or lactic acid buffering properties, it is best to mix pure bottled water with Cytomax to gain the maximum benefits of fluid replacement. When you drink two 20-ounce water bottles of Cytomax at every workout for every hour that you exercise, your systems will return to perfect balance much faster. You will recover faster and have more energy in the ensuing hours because you exercised, rather than less.

How is Alpha-L-PolyLactate in Cytomax an Acid Buffer?

Alpha-L-PolyLactate found in Cytomax Performance Drink has two primary functions in our body: supply energy faster than glucose and act as an acid buffer. Alpha-L-PolyLactate lessens the effects of acids by helping to remove them from the body.

The effectiveness of a buffer is tested by determining what happens to the pH (acidity index) when acids or bases (alkalis) are added to a solution containing a buffer, such as Alpha-L-PolyLactate. According to this system of measurement, neutral pH is scored 7.0. Acidity means pH is less than 7.0 and alkalinity means pH greater than 7.0. In order to make an Alpha-L-PolyLactate solution acidic, a significant amount of acid must be added. Due to its chemical structure, Alpha-L-PolyLactate resists strong acids from changing the pH.

In summary, Alpha-L-PolyLactate by itself is a strong buffer in the body. Alpha-L-PolyLactate is an optimal fuel source as it works faster than glucose, but the metabolism of the lactate anion in Polylactate buffers by causing the removal of acid protons.

How Does Alpha-L-Polylactate in Cytomax Work Faster than Glucose?
Most cellular energy is generated in an area of the cell called mitochondria, also referred to as 'Powerhouses of the Cell' because that's where oxygen is utilized. In cells, mitochondria form a vast energy producing and distribution network, which fuels the products of food digestion and enzymatic breakdown are burned. For cellular energy production to be maximal, both oxygen and fuels need to be delivered to cells. How can cells make energy faster from lactate in Cytomax's Alpha-L-Polylactate than from blood sugar (glucose)?

The first reason is that lactate use is more direct. In order to provide cellular energy, glucose from the blood must move past the cell membrane barrier. This process is not fast because glucose transport proteins on the muscle cell surface act relatively slowly. Once inside, glucose must be broken down into pyruvate (P) and lactate (L). In resting muscle the L/P ratio is about 10, meaning the muscles contain 10 times more Lactate than pyruvate. During sustained exercise when oxygen uptake is high, the L/P ratio rises to 100 or greater, indicating that Lactate, not pyruvate is the major fuel for oxidative metabolism. Compared to the limitation in glucose entry, the formation of lactate and pyruvate.

The second reason why lactate is used faster than glucose in the mitochondrial energy transduction network is that cell membranes contain transport proteins designed by nature to move lactate into and out of cells. These fast-working transporters (sometimes called monocarboxylate transporters or MCT's) are abundant on the cell surface. The MCT's or Lactate/Pyruvate (L/P) transporters also allow energy fuels into mitochondria.

In sum, the lactate in Alpha-L-Polylactate found in Cytomax is a faster fuel in mitochondria than glucose for three reasons: 1) transport proteins (MCT's) are faster and more abundant 2) the steps in converting glucose to pyruvate and lactate are skipped 3) lactate transporter proteins move fuels across both cell and mitochondrial membrane barriers.

During: Use Cytomax Performance Drink continually during exercise (32 fl-oz./hour) to ensure proper hydration/electrolyte replenishment and optimum levels of performance.